If you’re ready for some LIVE Rock-n-Roll, then get to the Craft House Stage & Grill on February 26! We will be opening up for a Styx cover band. It’s going to be a great night of Classic Rock music!

Start time and ticket information will be available soon!

The Journey album cover art in the late-70’s is just as iconic as their music. Alton Kelley and Stanley Mouse were the creative artistic minds behind many of the early Journey album covers. Their storied careers began with the creation of psychedelic promotional concert posters in California. They were responsible for such classic album covers as Styx’s Grand Illusion, the Steve Miller Band’s Book of Dreams and many Grateful Dead albums.

The Infinity album is almost hot to the touch with the flaming wings on this famous cover. One look at it and instantly ‘Wheel in the Sky’ bubbles to the top of your mind’s playlist. The peaceful scene of the earth appearing in the marble shape is ushered into far and distant worlds by the glowing wings which appear to be suspended in outer space. There is no limit to where your journey takes you when you’re accompanied by good and creative music. The wheel in the sky keeps on turning, don’t know where I’ll be tomorrow. The wings and marble world are wrapped in the band name appropriately in the form of the infinity symbol.

The Evolution album cover is strangely similar to the Infinity cover, keeping with the wing theme. A mountain and stream scene within a bubble shape, wrapped tightly within the infinity symbol again. Though the theme is similar, there are some striking differences. Instead of a peaceful earth scene in the sphere, there appears to be a volcano with flowing lava. This may represent the turmoil and upheaval of the real world in which we live. This album also has different kind of wings. In contrast to the flaming wings on Infinity’s cover, the wings on Evolution are green, sprouting from an earthen brown hue. Green is often associated with renewal, rebirth, health and harmony. If that is the case, then this particular album’s artwork could represent that the music on this record offers a flight to a different place… a place of escape, a place of peace and tranquility, a place where everything goes your way.

The Infinity and Evolution album artwork has captured a universal truth about the timeless nature of classic rock music. Every note, every lyric… striking a chord that echoes into forever, painting indelible scenes on the canvas of our minds and attaching themselves permanently to our lives. This is the lure of classic rock: taking a trip to our past, returning to a better day by re-living some of our greatest moments through music.

Get ready for some LIVE Rock & Roll! It’s another night out with Trevolta at the Bonniebrook Clubhouse in Butler on Friday, November 20th. Joining us will be the most awesome rockers, Macro Aggression. They play freakin’ loud music… something we have in common!

All true Pittsburghers love a game of Cornhole! Assemble your team and take a road trip this Saturday to the Cadogan Softball Fields near Kittanning for a Cornhole Tournament (West Ford City Park on Ford City Road, Route 128). This is a cancer benefit event – $50 per team and prizes will be awarded! To add to the fun, Trevolta will be providing the Rock and Roll, along with Half Way Down and some other bands. The weather forecast is looking good, so we’re hoping to see you there! Festivities kick off around 11am. Trevolta hits the stage first, so don’t be late!

We recently had our equipment trailer updated to have our awesome Trevolta logo attached to both sides and the back. Check out this video clip and photo from our gig last Friday where we got to debut the upgrade! 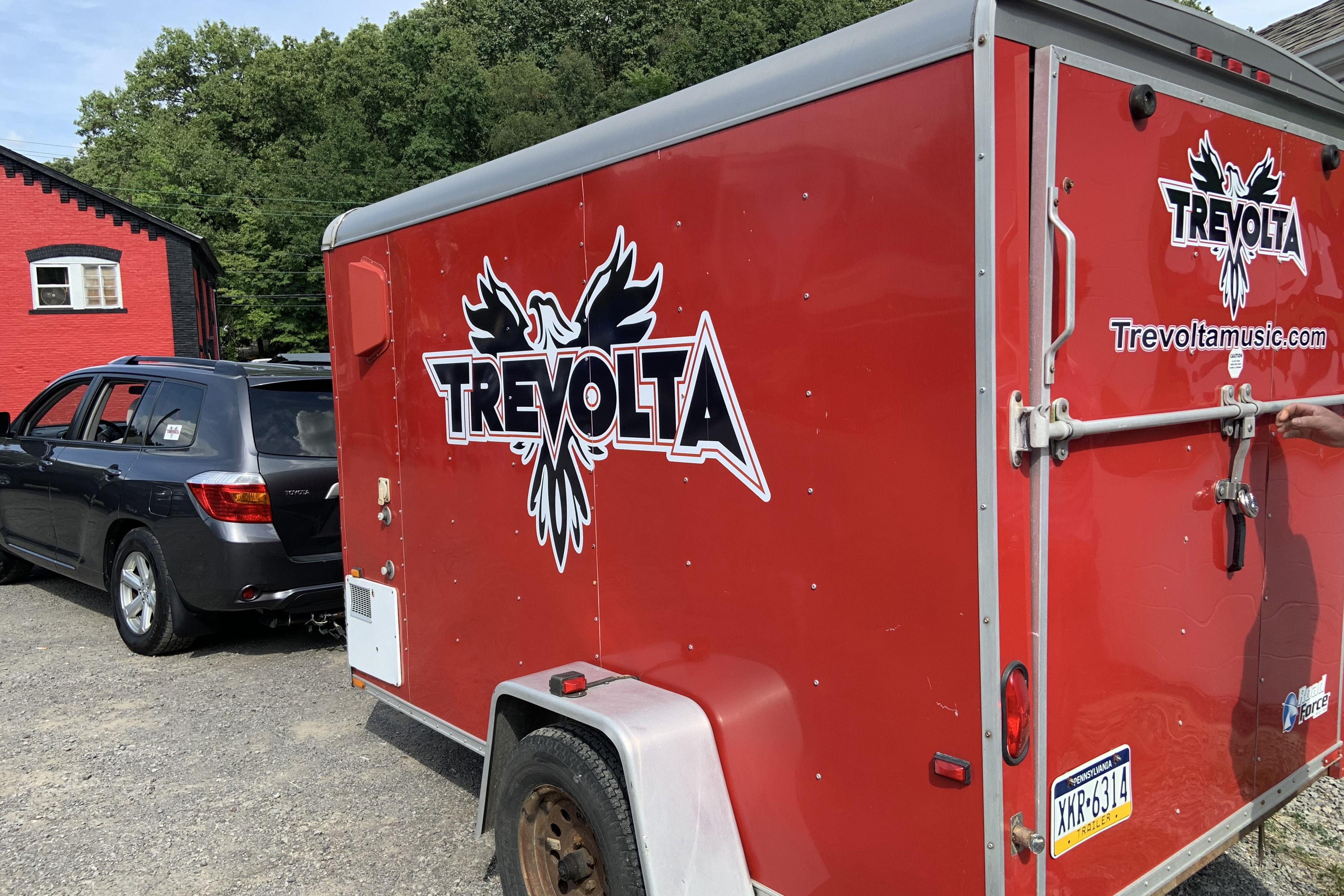 It’s Bike Night at Knuckleheads Bar & Grill in the North Hills of Pittsburgh! Trevolta will be there to kick start the weekend on Friday August 21. It’s an OUTDOOR show and we promise it will be LOUD. And we’re trying to make the set list extra long for all you heavy rockers out there.

We know you’ve been cooped up for a long time and you are ready for some LIVE music, so head down to 146 3 Degree Road in Pittsburgh. First drum beat at 7:30pm.

The Bonniebrook Clubhouse didn’t get enough last month, so they’ve invited us back for another hard-hitting show! We’ll be there ready to rock and roll in Butler on Saturday, September 12th! Our friends ‘Half Way Down’ will warm up the stage for us – and they will be on starting at 7:00pm. It’s an ALL AGES show and there’s NO COVER! You don’t want to miss this one! We have a heavy-duty set list prepared and so it will be a great night to jam! 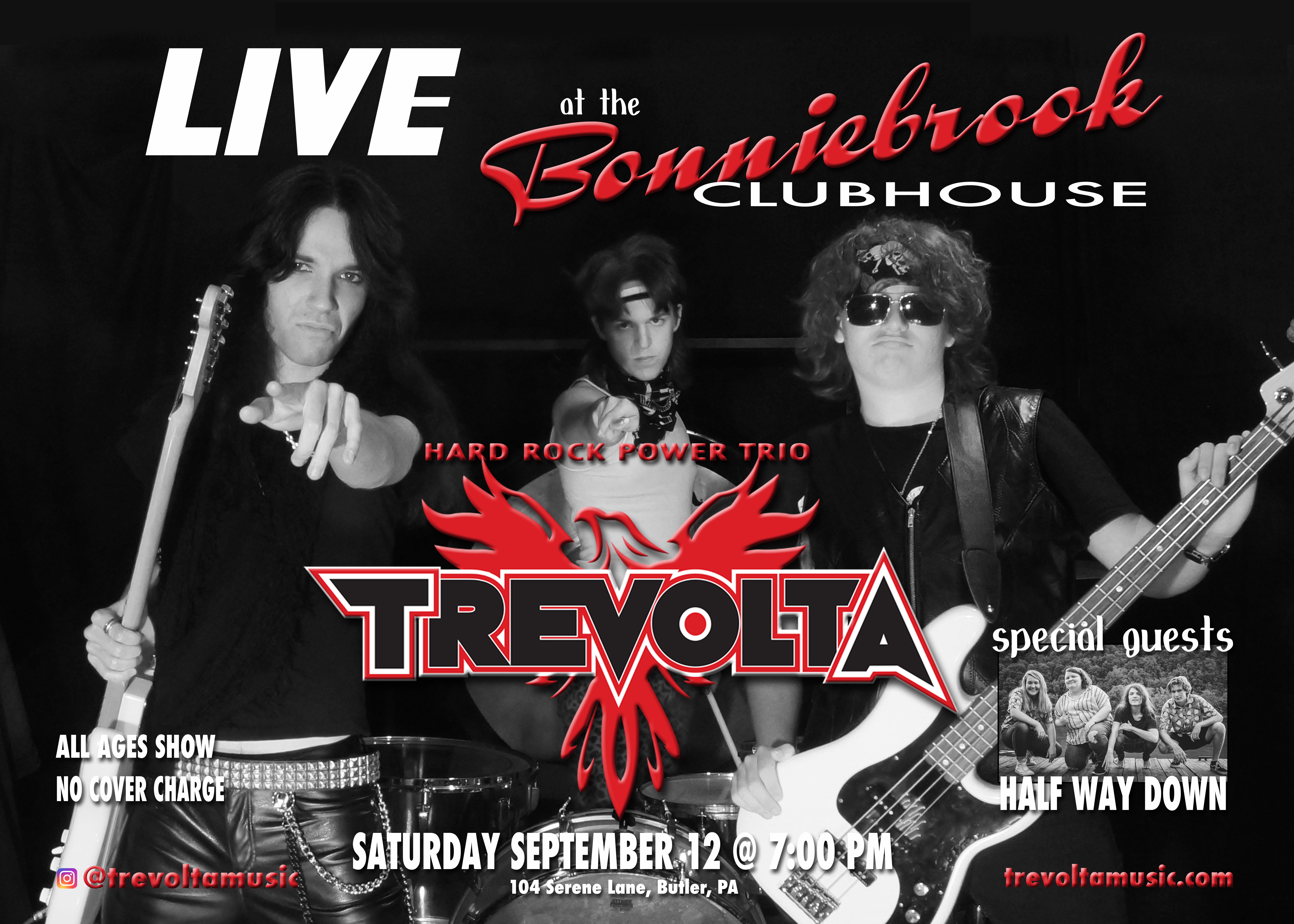 Join us for a Rockin’ night at the Bonniebrook Clubhouse in Butler on Friday, July 10th! We plan to have another band to warm up the stage for us (band to be announced soon). It will be a great night to jam!

The music is scheduled to begin at 8pm. See you there!

Join us next Saturday, June 27 at the 5th Annual Rockin’ with Ryan’s Wings Bike Run & Music Fest. The music starts at 3pm and goes until 11pm and is at the outdoor pavilion at 1877 Shriners Way, Cheswick.

It’s an all-ages benefit show for the Ryan’s Wings organization whose goal is to raise awareness through education about the dangers of using prescription drugs and to be able to raise funds to aid those who need financial assistance and/or have no health insurance to cover their treatment. It’s $20 at the door and all for a good cause!

We are pumped to finally be doing LIVE MUSIC again, so it’s going to be extra loud and energetic! Don’t miss this opportunity! Our stage time has been changed to 6:30pm. See you there!

The release of our EP is delayed due to the Covid-19 lockdown. We will have updates very soon!